I remember some of the details of the days leading up to my breast cancer diagnosis and of the moment the doctor called me with the results. The initial memories I do have are memories of disbelief and fear, not anger. The memories are of deep sadness, but not pity. They are of confusion and guttural pain. It’s a day nobody wants to experience and a day I will never soon forget.

I was diagnosed with breast cancer October 1st 2013, I was 43 years young with no family history of the disease. I was one of those ladies that never took the self exam seriously. But on that one, very random evening in late September for no apparent reason at all, I gave myself a breast exam and found a lump. It was a hard mass below my left nipple and it seemed to appear out of nowhere. That night my husband and I convinced ourselves that it was a cyst, it couldn’t be cancer. Not only did I not have any family history, but I worked out 6 days a week. I’m allergic to sugar so don’t eat any and I’m a vegetarian. Other than the major debacle with my right arm I was otherwise very heathy. This could not happen to me.

I was out of town the night I felt the lump and as chance would have it, it was on a Saturday. During my initial frenzy I contemplated going to the emergency room, but I had to come to grips with the reality that I had to wait. The compulsion for an answer that gripped my every breath was intense and yet I could do nothing about it. By Tuesday, I was back home and called my obstetrician who referred me to a breast specialist. Oh boy , I thought, here we go. I called the specialist and begged my way into an appointment the following morning. More waiting. I look back to the waiting during those days and I still shake my head. It was agonizing.

The following morning my husband and I headed to the “specialist”. Something unexpected happened when I checked into the reception area that morning. I started to feel humiliation. I had a lump. I was a marked woman (I thought) and I actually felt shame. I can’t explain why I felt humiliation, but I can only surmise it was because of the stigma attached to the word cancer . I remember growing up and adults whispering to each other, ” oh she’s the one with cancer,” like it was shameful. I had already felt fear and now I felt the black mark.

The specialist’s office was typical and systematic. We got to speak to the doctor fairly quickly, a brief hello and off with the shirt and bra. He did a physical exam and said that he believed the mass on my left breast was a cyst just from the touch and from the way it “moved.” I felt a surge of relief. I may have even smiled. The doctor then asked my husband to head to the waiting room and I was shuffled over to the line for the mammogram. I sat next to another lady who was older than me, I recall. She was very pleasant and started to talk to me. She said that she was there for her 6 month check up. She also said she had been diagnosed with breast cancer the year before, but that it was stage one and therefore she didn’t have to undergo any chemotherapy treatment. I felt sorry for her. She, although older than me, was still way too young to have had cancer- I thought.

Shortly after my mammogram , I was back in an exam room feeling pretty confident and a bit more at ease. The doctor came back into the exam room, sat next to me while placing his hand on my knee and said in a quiet , genteel voice that possibly it wasn’t a cyst, but that I should not be concerned. He also said that they needed to do a needle biopsy the next day. This was some kind of roller coaster and my brief feelings of relief were washed away by total panic. I remember I started to cry. All the emotional courage I had mustered up collapsed right before me. I asked for the nurse to go get my husband and she did. My husband walked in a few minutes later with a swagger and a smile but when he looked at me he immediately stopped and asked ” what’s wrong”. I explained to him what the doctor had said to me and then he lowered his head and in a solemn manner spoke out an, “awwwwww” sound . I knew from his tone and expression the he knew at this point that this was serious. As much as he recovered quickly and tried to convince me that it was going to be fine, I knew he felt differently.

It was at this very moment when the anger began. We left the breast specialist’s office and as I walked to the car I started to sob. You see, in the 14 months prior to this very day, I had had surgery on my right arm that led to an infection which went misdiagnosed for 5 months. The infection- during those 5 months- literally ate away all of my cartilage in my right wrist and broke every single bone while decaying the bones that were left. The misdiagnosis led to 6 additional arm surgeries, somewhere around 14 different arm casts and months of ridiculously painful physical rehab. It also led to my having a PICC line that was inserted into my upper right tricep and threaded to my heart. This allowed my “new” infectious disease doctor (I didn’t even know this type of doctor existed) to pump me with what was described as ” World War 2 ” intensity antibiotics to stop the infection. Even after all this, I ended up with a permanently disabled right arm.

So, on this very sad solemn day in late September 2013 while walking to my car fearing the worst , I was still in a cast . You see the reason I was out of town when I found the lump was not because I was on some kind of vacation after the arm debacle. It was because I was in NYC seeing the surgeon that had just fused and bone grafted my wrist. It was my 6 week post surgery check up. I hadn’t even gotten a chance to realize the magnitude of my permanently fused arm and I was worrying about having breast cancer. By the time I got to the car that day in Dallas Texas, in the parking lot outside of the breast specialists office, I started to scream. Literally scream in broad daylight. I couldn’t wrap my brain around having any more pain, any more suffering and I especially couldn’t imagine having cancer. Was all that I had gone through with my arm not enough? Was I being punished? I screamed and screamed and screamed some more. Not me. Not me I cried. 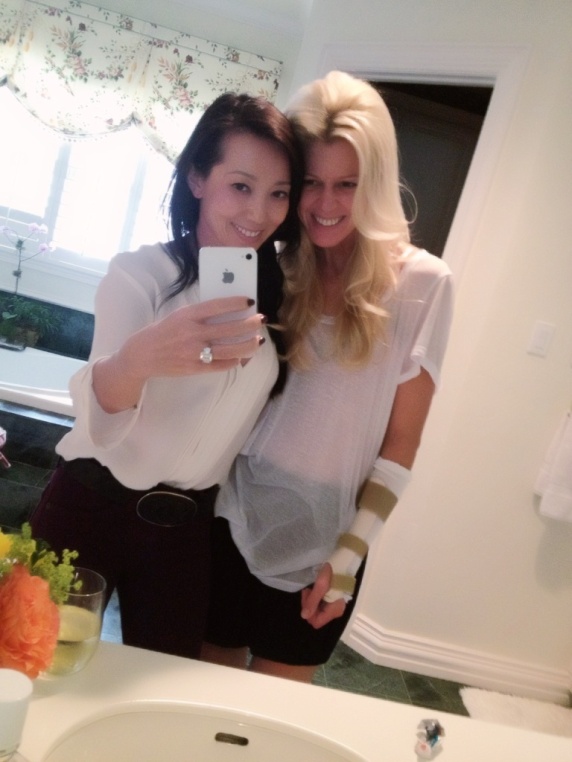 The week before chemo starts.

Chopping hair off before losing it to chemo.

Christine resides between Dallas and Miami. She is a wife and mom to two great teenage sons. She’s a former model and power athlete. Stay tuned for Christine’s next inspiring post! She is also writing a book about her dual journey with her battle with breast cancer and the fusion of her arm.

57 thoughts on “NOT ME by Guest Blogger Christine Handy”